Ah, Halloween, the season of trick o’ treating and pumpkins…. And where there are pumpkins, there are pumpkin seeds, also known by their Spanish name, pepitos.  Pepitos are rich in nutrition:  magnesium, zinc, Vitamin B, E, K and more.  But what I really love about them is the added protein, crunch, flavor and fullness I get when I eat them.  I like them roasted and salted.  Both roasted and raw pumpkin seeds have nutritional value but raw has more as the roasting process can strip away some of the nutrition.

I try to keep a bag around at all times, not just during pumpkin season, as I eat them as a snack, add them to lentil soup and to my salads. In fact, pumpkin seeds are the big flavor and crunch factor in my Kale Quinoa Salad with Pumpkin Seeds.  I love this salad as you can eat it warm or cold, and the ingredients hold up in the refrigerator for a few days without the kale getting soggy or limp, like other salad greens with dressing on them.  You can make this salad with just pumpkin seeds or use the blend of pumpkin, sunflower and sesame seeds that I use for added depth. 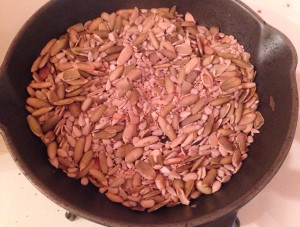 Add Kale to large bowl.  In a separate small bowl, add oil, lemon juice and salt and mix.  Add dressing to kale and mix through.  In a saucepan on the stovetop add the quinoa, water and stock and cook until quinoa is done.  In a non-stick frying pan, add the pumpkin, sunflower and sesame seeds and heat on medium flame tossing constantly, until the seeds are heated through but not burnt.  Add the quinoa and seeds to the kale and mix through.  Serve immediately or refrigerate until cool.

October is Breast Cancer Awareness month.  There are so many articles written about what foods and what type of lifestyle habits help with prevention. I have read a lot of these articles.  I lost my mother to breast cancer 7 years ago. It was actually Paget Disease, a specific type of breast cancer.  So in honor of her and the millions of women – and men – who have been touched by this disease, and for the many millions who hopefully will be successful in preventing this disease from personally touching them, I present a roundup of breast cancer prevention food and health tips from around the web, that will hopefully influence your heathy living and eating choices for prevention against breast cancer.

Monthly Breast Self-Exams Adult women of all ages are encouraged to perform breast self-exams at least once a month.  Johns Hopkins Medical center states, “Forty percent of diagnosed breast cancers are detected by women who feel a lump, so establishing a regular breast self-exam is very important.”

Annual Mammography Screening mammography can help reduce the number of deaths from breast cancer among women ages 40 to 70.

Exercise regulary and often. Research suggests that physical activity reduces overall breast-cancer risk by about 10 percent to 30 percent. For most healthy adults, the Department of Health and Human Services recommends at least 150 minutes a week of moderate aerobic activity or 75 minutes of vigorous aerobic activity weekly, plus strength-training at least twice a week.  For a great strength-training regimen, see my blog post on my Female Body Breakthrough.

Limit alcohol. The Fred Hutchinson Cancer Research Center reports that the more alcohol you drink, the greater your risk of developing breast cancer. If you choose to drink alcohol, they suggest that you limit yourself to no more than one drink a day.

Avoid hormone replacement therapy. Menopausal hormone therapy increases risk for breast cancer, according to the Fred Hutchinson Cancer Research Center. The Center suggests, that if you must take hormones to manage menopausal symptoms, avoid those that contain progesterone and limit their use to less than three years.

What to eat to minimize risks:

Beans Women who eat legumes at least twice a week have lower rates of developing breast cancer than those who eat beans less frequently.

Blueberries Fresh blueberries are an excellent source of antioxidants, including cancer-fighting chlorogenic acid as well as the anthocyanin pigments that give them their color

Cruciferous Vegetables Research shows that eating a diet high in cruciferous vegetables such as arugula, broccoli, cauliflower, cabbage, brussel sprouts, bok choy and kale, have been proven to prevent all sorts of cancer, including breast cancer.

Mushrooms: A study published in Nutrition and Cancer in 2010 found that higher mushroom intake is associated with a lower risk of breast cancer among women who are premenopausal. Cremini, oyster and shiitake mushrooms, among others, contain antioxidants such as L-ergothioneine that may confer cancer protection.

Salmon, Sardines, Shellfish: Researchers at the University of Southern California and the National University of Singapore found that postmenopausal women who ate an average of 1.5 to 3 ounces of fish or shellfish daily were 26 percent less likely to develop breast cancer during the five years of the study than those who ate less seafood.

Spinach: Researchers from the National Institute of Environmental Health Sciences found that women who ate spinach more than twice a week had lower rates of breast cancer than those who rarely ate the vegetable.

What to eat when fighting breast cancer

Flaxseed: University of Toronto researchers found that women with breast cancer who ate two tablespoons of ground flaxseed each day slowed their rate of cancer-cell growth.

Garlic: In laboratory experiments, scientists have found that allyl sulfur and other compounds in garlic slow the growth of tumor cells.