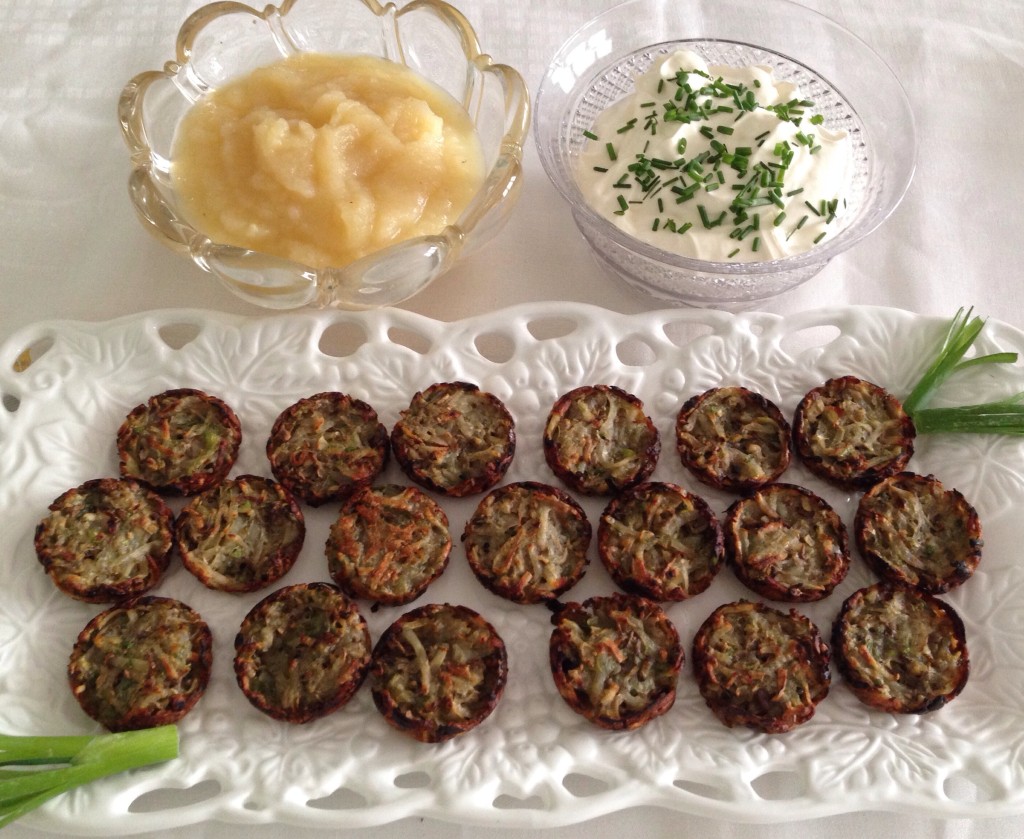 With Chanukah falling the night before the big feast of Thanksgiving, I thought it might be a good idea to balance the our stomachs and celebrate the Festival of Lights with baked mini potato latkes.

Potato latkes have become the ceremonious food served during Chanukah to symbolize the one day’s worth of oil that miraculously lasted 8 days to keep the Temple lit. So traditionally we eat fried foods like latkes and jelly donuts to celebrate.

But with Chanukah falling at the same time as Thanksgiving I wondered, how much heavy food do we really need to consume in one weekend?  Some traditionalists will say fried latkes are necessary, and that is fine.  Freshly fried potato latkes are wonderful. Especially when served with sour cream and/or apple sauce. But for those who want to celebrate but do not want the added oil needed for frying, this recipe enables you to eat and serve crispy potato latkes, using just 4.5 tablespoons of oil for a batch of about 50 mini latkes. 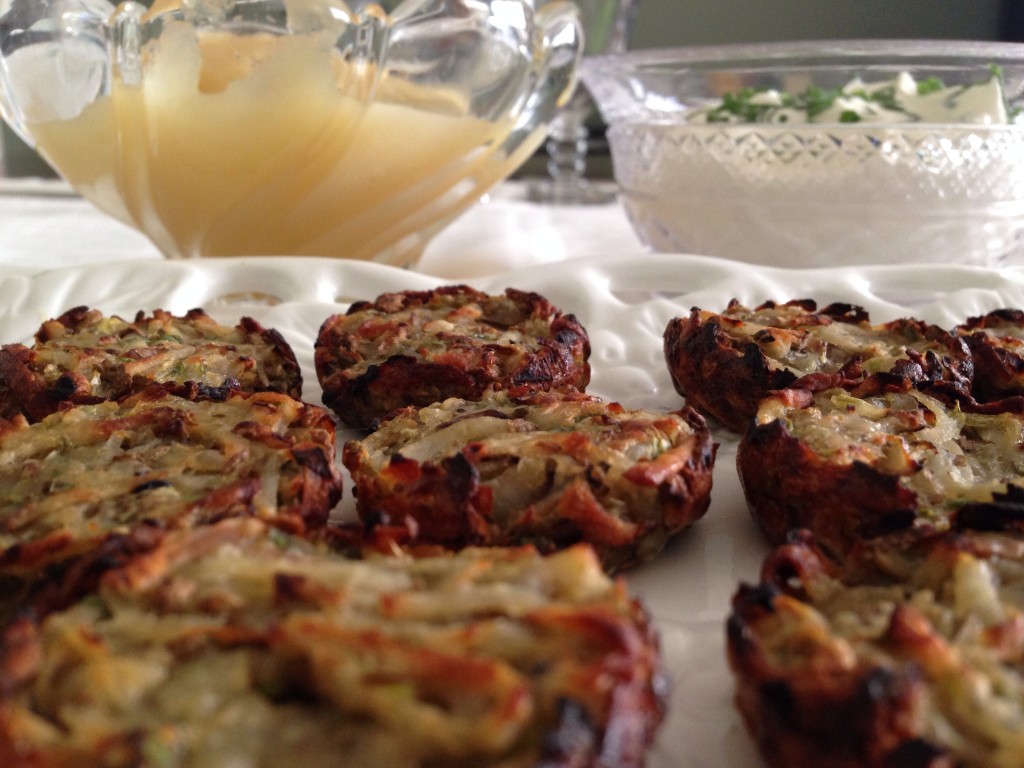 Mini, non-stick, muffin tins provide the vessel for making this recipe and keeping the latkes uniform and making them crispy. The latkes are baked at high heat in a 400° oven.  The sides and bottom crisp up nicely.  The top of the latkes, do not crisp up as much, even though the recipe calls for turning the latkes over, but with the rest of the crispiness, they taste great and have a good crunch. I use Einkorn flour to bind, rather than the traditional Matzo Meal, so that gluten-sensitive people can still enjoy. You can double this recipe or even cut it in half if you want to make fewer latkes. And, you can make these latkes in advance and freeze them, heating the thawed latkes in a 400° oven for 8 minutes.

In a food processor with the shredder disc in place, shred the potatoes and place in a colander in the sink to drain the liquid.  Remove the shredder attachment and add the chopped blade to the processor and chop the onions until them are really fine.  Add the potatoes, onions to a mixing bowl large enough for the colander to fit, then add eggs, flour, salt and pepper and mix through.  I use my hands.  Place the mixture into the colander and the colander into the bowl so that the mixture keeps draining as you make the batches.  This is optional but I find it helps drain the potatoes really well.  If you don’t do this, you can always just spill it out as needed.  This will help them to crisp up better.

Pre-heat oven to 400°.  Place rack in middle of oven.  Using a pastry brush, brush a 24-count non-stick mini-muffin pan with oil.  Fill each individual muffin tin 3/4 way high, brush tops with oil on pastry brush.  Bake 10 minutes, then turn each latke over and bake another 8 minutes. If making full batch, repeat with next batch.